To say I've had a tumultuous month would be an understatement. My house renovation bills are escalating. I received a not so nice letter from the IRS. I am trying to organize pack outs, school enrollments with 3 different school curricula for 2 kids and generally feeling a bit overwhelmed. To top it off, the final payment for the house we sold a year ago, didn't come and doesn't seem likely to come for quite some time. Since it's not really my nature to sit around and feel sorry for myself, I just keep trudging along doing what I need to do to get things done. However, there wasn't a lot of joy running through my veins this morning when I hung up the phone with the people who aren't paying us.

Just then Ewan walked through the front door carrying a package. He spent the night at one of his friends' house. Daniel is a nice kid and his parents seemed pretty cool when we spent a few minutes chatting with them yesterday afternoon. They are actually from Malaysia, but have been in New Zealand for over 20 years. We spoke about our kids, the advantages of living in New Zealand as opposed to Malaysia and we tried to explain our crazy lifestyle to them. We laughed about the idiotic price of seafood in this country since everybody seems to be able to just walk over to the waterfront and pluck it out for free except us!

I was particularly animated about my outrage at the price of lobster. I mean really, it is shameful what they charge for lobster here. They explained that they charge so much locally because they get so much more for it when it is exported. Well that doesn't remedy the fact that I really like lobster on special occasions. But I refuse to pay $85 dollars for one. We giggled, exchanged pleasantries and said goodbye wishing that we had met them sooner because they seemed like really nice people. 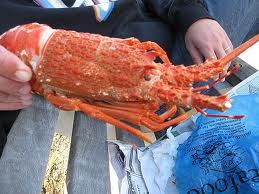 So, back to Ewan and that mysterious package. You guessed it, it contained a fresh New Zealand lobster. I was gobsmacked. In that one instant two virtual strangers turned my ridiculously dismal morning into a bright shining moment that will be one of my best memories of New Zealand.

Thank you Jeffrey and Evelyn. You'll do.
Posted by Noble Glomads at 2:27 AM