Remain homeless or no?

I (we) have been struggling with whether or not to buy a house back in the US.  We are currently on our first assignment in NZ and gearing up to bid for our second post. Of course, we have no idea where our second post will be but we do know it will involve consular training in DC. Thus, home leave plus training and possible language training following. So, we could be looking at up to a year in the States before our next post.

Is this long enough to justify buying a house? Oh, yeah, and we want to buy one in North Carolina-where we lived last. It is a scary prospect. The boys and I will live away from Dad for the duration so that they boys can go back to their old school in NC and have a sense of belonging to a community.

As most State Department families know, it is nice to think of having your own place to go back to for R&R and home leave instead of cramming the family into a hotel or grandma's couches. But is the expense and worry worth it? Can it be justified when you are going to leave it vacant for most of the time? The town we are from doesn't exactly have a thriving rental climate plus, I don't like the idea of people being in "my" house when I am not there.

We have always been nomads even before the State Department and have bought and sold 5 homes in 5 communities over 15 years and never thought of them as investments, they were simply our home.  I cannot believe how conflicted I am about this decision. Most spouses I have asked thought it was a no brainer. Of course I should buy a house back in the States if my husband was on board.  Many spouses I speak to long to go back to the States and have a sense of "normalcy" for their kids. Maybe it's because I am new at this, but I look at it differently. Yes, I do miss things about the States and I love it there but this is the life we chose. When we decided to leave corporate America and all the material things associated with it, we knew it would be difficult and different. We knew we just signed ourselves up to disrupting our children's lives every 2 to 3 years until they left for college. We knew we would live wherever the State Department decided we would live and have ugly curtains if that was what was in the cards for us (just had to get that in).  Now, we are talking about trying to recapture a little bit of what we had back in the States. A safe, comforting place to go back to if there is trouble where we are posted.

I dunno, I really don't. Surely renting a place can be a better decision during these uncertain economic times? But, then, we wouldn't have a home that we could go back to every time. If we bought a house now, it would be paid for by the time we retired - a bonus. I guess I need to think about it a little more.
Posted by Noble Glomads at 2:06 AM 4 comments:

My kid is running to South America 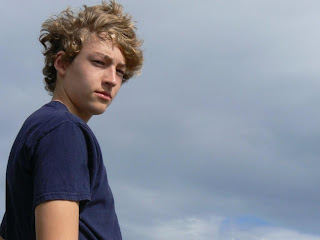 When Morgan first told me that he wanted to go to South America with his school's Rugby Team I was a bit confused. First of all, he wasn't on the Rugby Team.  In fact, he had never even played rugby before in his life. Second of all, what the heck would a high school rugby team from New Zealand be doing in South America?  "Um hm.  Alright honey, sounds like fun".  Then he brought home the flyer.

As it turns out, his school's team does in fact go to South America in July for a tournament. They play in Chile, Uruguay and Argentina. It did not even warrant contemplating. There was no way I was going to send my little boy (he's 14 and 6'2" tall) to the other side of the world and play the roughest sport I've ever seen. The fact that it was going to cost $6,000 was another deal breaker. No way.

Then the lobbying started.  From Dad. I thought he was insane. He actually thought this was a great idea. I think he was more excited than Morgan. I was not going to be swayed. Then the earthquake happened and I checked out for a bit. Everyone in the house knew not to upset Mom so they kept things from me. When the permission slips came home from school they were diverted to Dad. The deal was done. However, they forgot one crucial element, I have control of the checkbook.

Ha! "Well, I understand why you want to go and I can see your point but there is no way I am paying for it", I said. "Ok, we will pay for half if you can earn enough money to pay for the other half".  Yes, I know I am the ultimate push over but he still had to make the team and earn $3,000 so I wasn't worried.  As it turns out he's not a bad rugby player. In fact, he's good. Crap.  Well, there's no way a 14 year old can earn $3000 in 4 months. He doesn't have a work visa and there aren't really any lawns to mow.

My next lesson was to never underestimate the cleverness of a teenager on a mission. Morgan decided he was going to run the Wellington Marathon in June and ask for sponsorships. Very clever. He wrote up his pitch letter and raided our email contacts. We know quite a few runners and good friends who would be willing to sponsor a gutsy kid who promised to run 26.2 miles during the windiest and wettest month in New Zealand. But, could he get enough people to believe in him and want to give him money for it? I mean, he wasn't exactly asking for money for a charity. He was asking for money for a once in a lifetime trip for a KID.

So far he has $2100 in pledges. I can't believe it. Granted, grandparents chipped in heavily but I was amazed at the response. He even started a blog of his journey, set up a donation site and promised to send postcards to each and every sponsor. You can view his blog here.  I am still an over-worried Mom but I cannot help but be proud. Now he just has to finish!
Posted by Noble Glomads at 5:07 AM 2 comments:

Can your kids have a normal life in the Foreign Service?

When we were contemplating this life change, one of our biggest worries was that we wouldn't be able to give our kids a traditional American upbringing. They had become accustomed to playing outside, walking to their friends' houses and enjoying the freedom that comes along with living in a sleepy little suburban village. They walked to elementary school, their soccer games were essentially in our back yard (the fields were that close) and I never had to drive anyone to a play date since there were @ 20 kids in our cul de sac, half of which were near the same age as my own boys. Bliss.

Looking back to my own childhood I realized I didn't always have that. My parents were divorced and we moved often. By the time I was 17 I had had 23 "homes" and 8 different schools. I turned out ok, right? My husband also lived a somewhat nomadic life as a child. Born in Scotland, moved to Germany, shipped back to Scotland for boarding school, then India, then back to Scotland. So, our sense of normal was a bit different.

Rather than go into the details of how it is possible to raise great kids and give them a "normal" childhood, I threw together some pictures.  After all, they are worth a thousand words right? 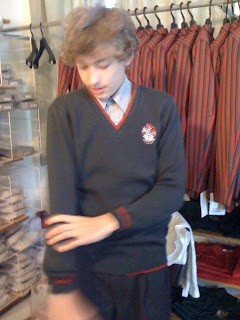 They get new school clothes 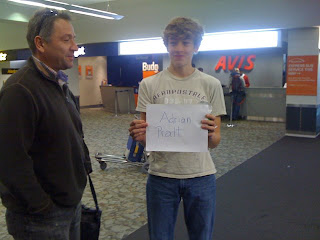 Go to the airport 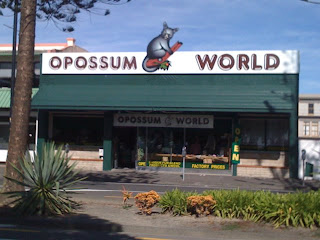 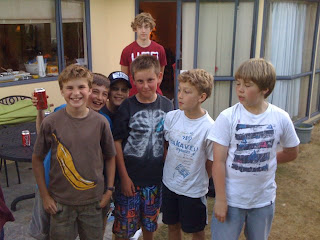 Have birthday parties with new friends 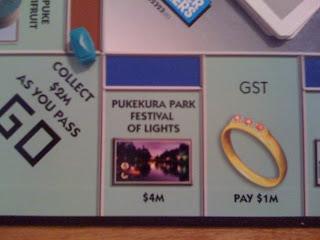 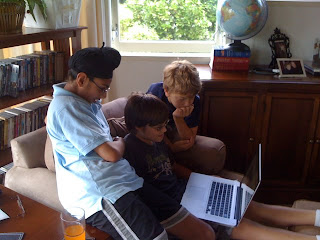 Check out the web 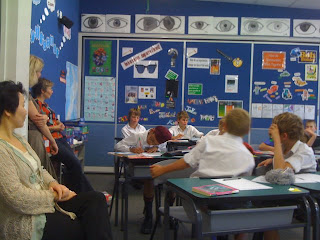 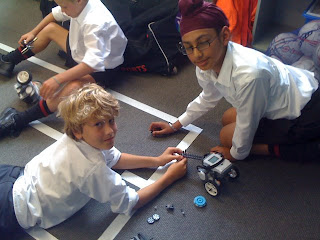 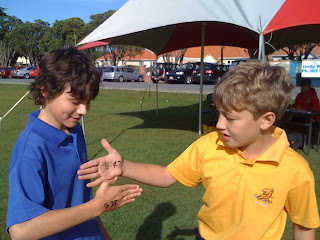 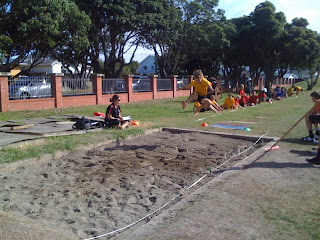 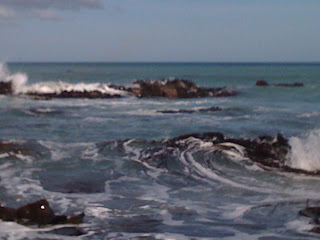 Go to the beach 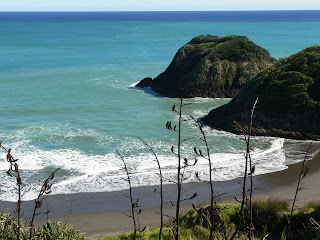 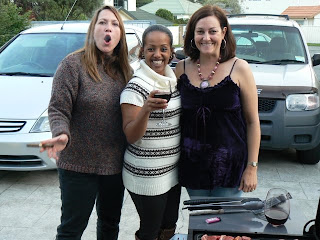 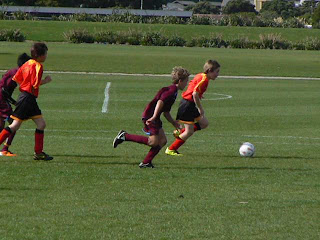 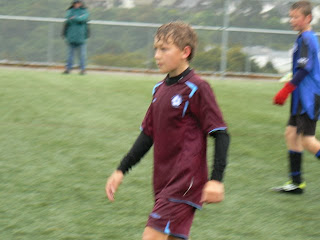 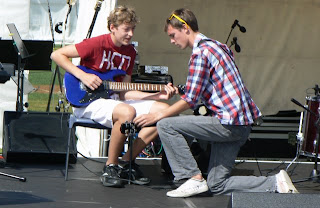 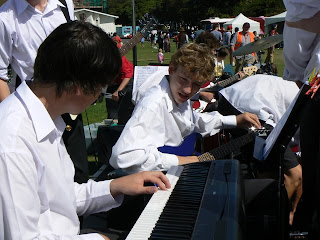 Play in their school band
So, yeah, it is possible to have a "normal childhood", only better.
Posted by Noble Glomads at 2:59 AM 1 comment: