Pilgrims and the Mongrel Mob

So today I had the privilege of serving an American Thanksgiving dinner to the less fortunate residents of Wellington. I wasn't sure what to expect since I had never done this sort of thing before. I'd done my share of volunteering over the years, but I have always resisted helping in homeless shelters, though I would drop off food and sundry items every year. This year I would have to step up since the US Embassy in NZ had organized the event at the downtown mission.

We were all assigned a few tables to look after. We were to serve them as if it were a restaurant. They ordered soft drinks and coffee and we would then take them a plate. As people shuffled in I saw children, moms and dads, distinguished-looking older people, and a few young adults mixed in. What I didn't expect were the few gang members that waltzed in, all tattooed and scary looking. Of course, they sat in my section.

OK, deep breaths. As I approached my table I asked if I could bring them anything. Most ordered juice or Coca-Cola, but the apparent leader of this small group asked if I could get him a 20 year old. "Sorry", I said, "we're fresh out". I tried not to make eye contact. Now he wanted to make small talk. "So, where are you from in America?" he asked.

This is a tough question. I've moved a lot in my life, this one to NZ being my 31st. I began scanning my brain to come up with the coolest place I have lived to "bond" with my new friend. Florida did not seem gangsta enough. Philadelphia? No. Georgia? Definitely not. North Carolina ? Too white bread. South Carolina? Too wheat bread.

I know, "South Dakota" I said.  He looked at me puzzled. "Where the F is that?" he asked. "Well, have you ever heard of Sturgis?"

I had made a friend.

The rest of the lunch was uneventful until my table got a bit rowdy during the Ambassador's speech, with one drunkard asking for a Tui (a New Zealand beer) and another guy passing out.

Everyone was really polite and well mannered (except the drunk guy). I was astonished to notice that even the downtrodden and mob members of New Zealand have impeccable table manners. I even received a friendly kiss from one appreciative fellow. Everything was eaten and everyone was thankful. All in all it was a good day.

I came home very thankful for my life. Tonight I will soak my very tired feet and be happy that I have a home to live in, food to eat, and friends and family who love me.
Posted by Noble Glomads at 12:51 PM 1 comment:

The cost of living

Don't even get me started on the price of chicken. Those cute little rotisserie chickens that you buy everywhere for $6.00 are half the size here and $10.50.
Yes, it it gorgeous and safe here but eating is a luxury apparently.
We don't go out to eat anymore......period.

Labels: price of food in NZ.

Ok, I pay extra to have Vonage so my family and friends can call me in NZ for free. So far I've received 5 calls from my grandmother and as many from my Dad's third wife (she's cool) and my mother in law. Anyway, what is up with my mom, brother, friends and sister in law? Just a quick post to see if they even read my blog. Losers.
Posted by Noble Glomads at 11:59 AM 4 comments:

I have only been here for 3 months or so but already the embassy folks seem like one big family. Everyone seems to look out for everyone. We seem to bypass the usual pleasantries that most newcomers go through because, quite frankly, we just don't have the time. We are only here, or anywhere for that matter, for 2 or so years so...hello, nice to meet you, come to dinner, tea, walks, whatever. You're one of the group. Get busy.
Already, I am having to say goodbye to a great friend. Cecelia has to be one of the friendliest people I've ever met. We've been to her house twice already and I know of others who have been there dozens of times. She loves mothering and wants everyone to feel at home and to be well fed! Sadly, she is leaving to head to Poland. I'm sure they will love here there too.
I am already dreading Gina's departure. She isn't leaving until July but when she goes, it will be hard on a lot of people. Gina is our "gets things done" gal. If something needs doing, she will more often than not, volunteer to do it and do it well. It allows some of us (ahem) to be slackers. I suppose I will have to brush up on my organization skills. It's just too easy to call Gina to see what's happening.
The upside is that we get someone new for every departure. I have never known so many people that I have liked so much right out of the gate (all but 2- you know who you are). I think I'm going to like this State Department gig.
Posted by Noble Glomads at 11:55 AM 1 comment: 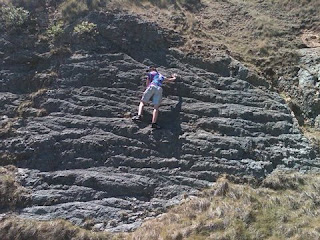 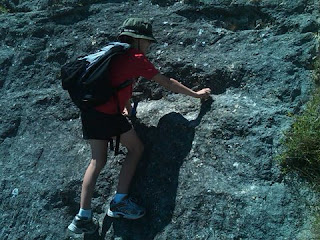 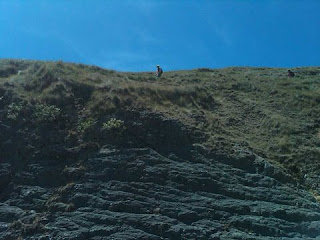 The Pratt family had one of those magical holiday weekends. Early Saturday morning we set out for a long weekend to one of Adrian's "picks of the week." He settled on a beautiful lake about 5 hours north of us. My mommy brain started calculating right away. Five hours means 2 pit stops, 3 bags of chips, 4 candy bars, 5 "are we there yets" and at least 2 " I wish we didn't have to comes" from the kids.

OK, maybe that's a bit harsh. Morgan is always up for a good adventure, but Ewan is forever whining whenever we stray more than 5 miles from home. Unless, of course, it involves his friends or soccer. Funny how he has already forgotten the time we drove 3 hours and stayed overnight in a campground with his soccer team to watch him in a tournament. Morgan even gave up his birthday to come with us- not that he had a choice.

So, off we headed to our stopping off point in Napier. I chose Napier because it had a nice beach that we could visit before heading on to the lake to hike for hours. Well, one look and we were hooked. We loved Napier. Our first stop was actually in Cape Kidnappers to hike the legendary Ta Mata Peak. It was brutal.

We all felt very superior in our fitness level when we made it to the top!  After the hike we headed to Napier and decided that we had enough of hiking and this looked like a nice place to spend the night. The stars seemed to be aligned for us. We stopped at the first hotel that we thought looked nice and Adrian booked it without consulting me while I sat in the car awaiting a full report. Does he know me? It was fabulous.  It was right across the street from the beach, a playground, mini golf course, and Marineland. Bliss.

We didn't want to waste any time resting, so we immediately set out to go kayaking. I have been wanting to kayak forever but never had the opportunity. We had so much fun. Morgan and I shared a 2-seater and Adrian and Ewan shared another. We spent a thoroughly enjoyable hour paddling around the inlet. Later that night we found a spectacular Texas style restaurant. While expensive (they all are in NZ) the food was excellent. The night was unfortunately cut short since Adrian had accidentally left Morgan's shorts drying on a hot radiator and we feared we'd burn the hotel down. So the boys jogged back to the hotel to turn off the radiator and I was able to have a few blissful moments alone to enjoy a well deserved glass of wine.

After a very competitive round of mini golf the next day, we headed home. Suddenly my pink house seemed charming and my fashionably challenged curtains were "quirky" instead of hideous. I have thoroughly enjoyed my new home this week and I hope my new optimism can be sustained as new challenges present themselves, like the fact that our vacuum caught fire today or that Morgan broke my favorite vase.

Somehow, it's just not important.
Posted by Noble Glomads at 12:02 PM 2 comments:

We were all excited to meet our Secretary of State in Wellington yesterday. I was worried about getting a parking space downtown so we left ridiculously early. We arrived while the secret service were still setting up the room.
We were all set to be told to bugger off and wait downstairs but I guess our embassy badges and security check was enough to let us wait in the reception room. Yay. I was wearing heels and didn't want to navigate the stairs again having already lost a heel on the way up. Yes, it was a bit embarrassing when a secret service agent came after me with the broken part of my shoe and said "uh, ma'am, is this part of your shoe?" Dang it. Luckily, we were able to put it back on so I wouldn't have to hobble around on one shoe. That would have been very awkward. I'm sure I made a great impression on the SS. Neurotic, ridiculously early, and can't walk in heels. I was allowed to shake Mrs. Clinton's hand nonetheless.
The event went incredibly smoothly and after some nice speeches, she came down from the podium and shook every hand. She had brief chats with a few of the children and then was whisked away to her next event.  We had fun.
On a personal note, I thought she looked beautiful and presented herself amazingly well.  Thanks to our Ambasador for making this happen for us and thanks too to Dr. McWaine for taking this video for me.