It takes a lot to piss me off.

My husband and I joke that I am the Golden Retriever of the human race. I am usually happy, wake up with my tail wagging ready to face each new day optimistically. If I get cut off in traffic I give the offending driver the benefit of the doubt "he probably has a sick kid in his car and it on his way to the emergency room", I often tell my kids as way of explanation. If someone talks about me behind my back I tend to forgive thinking they must be having a bad day or just need to vent and don't mean anything by it. So, when I am actually mad about something, I feel totally justified in expressing my outrage.

This week I had a meeting with my 3rd RMO since last year's devastating earthquake in Christchurch. It was bad, I got freaked out and sought help (I'd like to clarify that I was at the epicenter of the quake standing in the center of downtown staring at the Christchurch Cathedral as it fell on the cars parked in front of it). I was brushed off. When I had to go to my Dr. here in NZ to treat the all over body rash I developed shortly after due to my extreme anxiety caused by subsequent mini quakes here in Wellington he told me to take antihistamine and gave me prednisone. I asked for valium, he said no. Too addictive. Ok.  I get stuck in downtown Christchurch with buildings falling down around me and I get antihistamine. Do you know how prednisone interacts with an already freaked out woman? Ask my kids.

It always seems backward to me that doctors always want to treat the symptoms of an illness and not the actual cause. My rash was caused by the insane amount of adrenaline being pumped through my body and my body was trying to fix it by jacking my immune system into high gear. So, I understand the necessity of the prednisone and antihistamine but the underlying issue of the adrenaline being pumped through my body on an hourly basis went unchecked. I was still nervous and scared ALL THE TIME in the weeks after the quake. 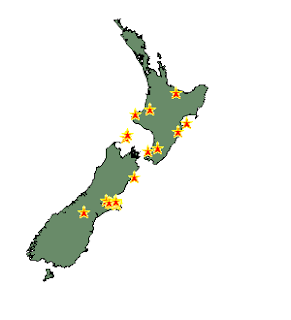 This represents the latest 30 quakes in NZ from February 2, 2012 until today. They range from 2.3 to 5.7 on the Richter scale. Just so you don't think I'm exaggerating.

So, I asked the regional RMO to help me out. She said I should be taking anti anxiety pills until the rash is under control and I stop freaking out whenever the neighbor takes his wheelie bin to the curb (sounds kind of like an earthquake). Great, I will just take my email from her to the local doc and surely he will write me a prescription. Nope. Too addictive, he told me to try drinking some wine before bedtime it will help you relax. I did take his advice and started drinking a wine. Lots and lots of wine. It helped in the moment but my liver was not happy.

A few months went by and my rash finally started going away and things were getting back to normal when we had another quake in June. Back to square one. RMO number 2 came to the Embassy and told me I really should be on anti anxiety medicine and she would mail me a prescription. What? It's that easy? Why didn't the other RMO simply do that 6 months ago? Whatever, I was happy with that except the prescription never came. Apparently I was supposed to remind her that she was going to send me a prescription. Ok, 'cause that sounds logical when you are dealing with a stressed out patient. Now I've got to do her job too? The earthquakes continue in NZ and we have a nice new crack in our ceiling to prove it but I am over freaking out and just pack an emergency kit, leave the house and hope for the best. 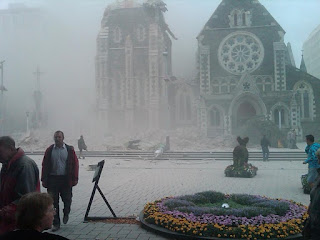 Then, the Embassy sent my husband back to Christchurch. This I did not like. Let's not even mention that they have had thousands of aftershocks since last February and a big one over Christmas that brought down more rubble. Nobody died so I guess they figured it was ok to send embassy staff back for another Codel. Adrian was totally ok with that, I wasn't. He's much braver than me. So, off I went to shoot an email to the original RMO again to let her know my rash is back and what does she recommend I do about it?  A month later I received a small vial filled with 10 pills for "emergencies". Whatever. My time of crisis is over and the pills remain sealed in the bottle. Let me emphasize that I am not interested in being medicated 24 hours a day. I like being silly and impulsive and having a clear head. I was simply looking for something to calm me down (instantly) in case another big one hit and I needed to calm down. In the days after February 22, 2011 I remember wishing that someone would just put me in an induced coma for a few days, just so I could get some peace. I was so upset and nervous that I would have rather been unconscious.
Last week we had yet a new RMO come and I was ready this time. I prepared a power point presentation for her to let her know how I really felt so she could see exactly where I was coming from and how that day affected me. I was beginning to think that everyone thought I was just standing outside during the quake, felt the ground rumble and then was airlifted out. That was not how it went down. This is how the day went for me. I was beginning to think that all these doctors were looking at me like I was some out of control junkie that was using the earthquake to get some kind of fix. As if I didn't really deserve valium or xanax or some other calming medicine because that was reserved for people who were in really bad situations and deserved to be streesed out. It made me doubt myself. I always thought of myself as a strong person - everyone does. Now I was no longer sure. These are professional doctors denying me, it must be me right? So I showed her my presentation. The system is broken sister and here's why....I thought it was a very good presentation and I left with a new prescription for antihistamines! No wonder there are so many alcoholics in this business (or so I'm told, I haven't met any yet). Luckily I am not so fearful and even enjoy NZ most days though I'd never live here permanently and am looking forward to our new post in India. But I am thinking that to be a part of this business you have to look after yourself. Nobody is going to hold your hand and make sure you get the help you need. I didn't even know I was eligible for medivac back to the States just after the quake until 8 months after. A nice quake break would have been helpful. Someone really should have told me that was an option.

So yeah, I took a power point presentation to my shrink after receiving help 352 days after my crisis. I'm such a drama queen.
Posted by Noble Glomads at 7:26 AM