Phew, no gold in sight.

It was a good day. The furniture is better than what I had and way better than none :) Thankfully I didn't get the gold furniture.  The majority of the upholstered stuff is brown. I'm ok with brown. The only thing I will complain about is the amount of furniture we received. We have way more than our house can hold but are required to receive all of it so the overflow is taking up the entire guest room.

Yeah, this is the new one!
Looks better in person.


This is new too, looks mysteriously like the old stuff but it has tags on it so it must be new!
Sadly, not much of an improvement.
My redecorated guest room
Guess I'm done.
Posted by Noble Glomads at 8:17 AM 5 comments:

Not going for Gold.

(not acutal couch, just what I am envisioning)
So, my house is empty of the old pink themed furniture. It is clean and somewhat organized as well. Kind of a forced spring cleaning. I have no idea what kind of new furniture I (we) am getting but I do have an inventory list with descriptions.
Apparently I am not the only one getting new furniture as five brand new sets have arrived.  So, tomorrow I will receive either red, blue, green, gold, or cream furniture.  Please, dear God, do not let us get the Gold furniture. The red would look a bit ridiculous with the pink walls but it would be better than gold. Cream would be nice but the kids would ruin it. I have no say and will be happy with whatever shows up but please pray we don't get the Gold.  Photos to follow tomorrow :)
Posted by Noble Glomads at 12:47 PM 1 comment:

Those who know me know that I am very sarcastic at times. I make jokes and exaggerate for a laugh and am, at times, self deprecating. So, when I complain about not being prescribed Valium I am half joking. I am also one of those people who doesn't often take medication unless I am half dead. Mother Nature has blessed me with an incredible immune system and even temperament so I haven't had much need for over the counter help in my life.  The February earthquake in Christchurch was an exception.

While my mind recovered from the shock of it, my body took a bit longer to get back to normal. After the earthquake I broke out in an all over body rash (literally 3/4 of my body was covered in a red rash) that lasted for weeks and still comes and goes during times of stress. For a person who doesn't often suffer from these sorts of things, it is incredibly frustrating. So, when I joke about needing Valium or some other anti-stress medication, I am half serious because that rash is a bitch.  Mentally, I can deal with the stress but I don't think I can deal with 3 new weeks of itchy.

As I sit here and write this blog, Christchurch is still shaking. Since the first 4.3 shake yesterday, they have had no less than 30 aftershocks the highest at 6.0. I would have passed out from the stress by now if I were there. I really cannot comprehend how people can stay there. When Adrian and I were caught in the February quake, my body pumped adrenaline continuously for 6 hours, then I got to come back to Wellington away from the aftershocks. Though we've had a few rough shakes here, it is nothing compared to what Christchurch is going through, yet, every time I hear a loud noise or a semi drove by, the adrenaline flows again. I could actually feel it releasing into by bloodstream. I suspect that this is what caused the rash in the first place - my body couldn't deal with all the chemicals it was pumping into itself. Now, multiply that by 100.  That is what I suspect these mothers are feeling every time they send their babies to school, send them outside to play or put them to bed. Will it happen now? In an hour? Tomorrow? Will it just shake the house or crumble it? Will my car fall into a liquefaction hole on the way to work or will a boulder roll of the hill and crush us? You can say that I am being over dramatic and a worrywart and quote statistics all day long but until you've been standing in front of a building that is literally crumbling toward you and until you've run through a park with liquefaction spouting up in front of where you are trying to run and until you helplessly look on while people are bleeding and begging for help and there is nothing you can do....don't judge me when I have that 3rd glass of wine or roll your eyes when I need a minute to compose myself every time the news shows pictures of the destruction. We're on the same freaking fault line.
From The Independet-an Australasia newspaper.

"For those charged with the unenviable task of trying to predict where the next major quake would strike it was always Wellington that created the most concern thanks to a prominent fault that is expected to produce a major earthquake in the next few decades and runs directly through the city centre."

There really is no answer. Nobody can predict if and when an earthquake will hit we can just prepare ourselves as best we can and keep living our lives, charging our cell phones and avoiding tall buildings just in case. I am also avoiding tunnels and bridges.
Posted by Noble Glomads at 1:43 AM 2 comments:

New Zealand, I don't care how good looking you are, I'm breaking up with you.

NZ has let me down again, Another 6.0 (the worst of 5 in the last 2 hours) quake to devastate the already mourning residents of Christchurch. Please keep them in your prayers, it looks like a never ending battle with Mother Earth.
Since my doctor doesn't seem to think that major earthquakes are a cause for alarm to a recent quake survivor and refuses to prescribe me anti-freak out medication, I have prescribed myself a two week vacation back in North Carolina.
Stay safe Christchurch, I wish I could take you all with me.

Details: 10 km east of Christchurch
Posted by Noble Glomads at 8:31 AM 7 comments:

Our new furniture has finally arrived (not yet delivered to the house though). Goodbye southwestern pink couches and ridiculously high armed love seats. The cream colored tables and chairs that radiate pinkness from the glow off of the walls are going too.Not much I can do about the curtains other than buy new ones but....I am ok with that for now.
It is no secret that I despise our furniture. I've said from day one that it is beyond ugly and I stand by that exclamation. You may have seen my previous before and after photos. 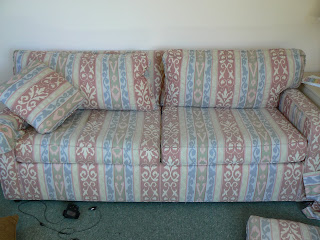 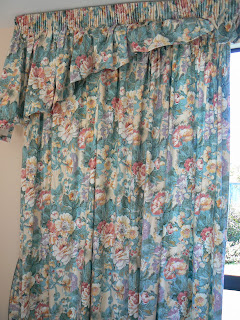 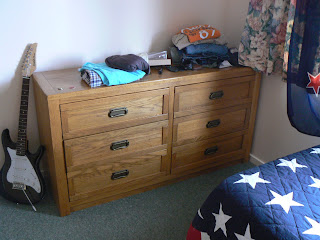 Our GSO reminded me that we would have to empty all of our personal belongings out of our current furniture which would no doubt cause us a lot of disruption.  I'm ok with that, it's a good excuse to do a bit of clothing culling.
Then, the movers would come and remove everthing one day and not bring the new stuff in until the following day. We would have to find a place to sleep since we'd have no beds. I'm ok with that too. Heck, I will sleep on the floor if it means I get a new bed that doesn't have magic marker all over the mattress not to mention the fact that it sags beyond comprehension.  Now when Ewan opens his dresser drawer in the morning to get dressed for school, the drawer won't fall out onto his feet. Very exciting.
It may seem silly to get so excited about something as simple and unimportant as furniture but unlike some folks here at post who may do one or two foreign assignments during their career then go back home, this IS my home. This is my only home. This is where I live until I am sent somewhere else. I do not have another "real home" to dream of and mentally decorate while I am living in this one. So, yeah, I am willing to put up with 2 days of total disruption for the sake of having a pretty home for the next year.  Lets just hope that the same GSO who chose the last lot of furniture didn't choose this one.  That's the downside, I don't get to see the new furniture before I choose whether or not to swap it out. I could be making a huge mistake but I'm willing to take that chance. My back cannot take another year on that bed.
Posted by Noble Glomads at 3:36 AM 7 comments:

Running to South America: 20 miles - and he doesn't wanna talk about it

Running to South America: 20 miles - and he doesn't wanna talk about it: "It was a dark and stormy day - no, seriously, it was. See, Morgan, this is the type of awful cliched writing you're going to get if you w..."
Posted by Noble Glomads at 1:40 AM No comments: