Last Day, what am I forgetting?

With a little more than 24 hours to go I am beginning to wonder if I have forgotten anything.
Posted by Noble Glomads at 8:17 PM 2 comments:

Not so young anymore

It's not that I think I'm old, I'm only 41 but I am realizing that I am not young anymore. Lately I've been relying on my 13 year old son to do all of my heavy lifting and I've sent my 10 year old to the convenience store a mere 100 feet away more times than I can count. But the number one reason I've noticed I'm not young anymore is going away parties. We've attended a lot of them recently as members of the 152nd make their way to their posts. Remember when we wouldn't even get ready to go out until 11 ? Now I'm home way before then. And, if it's not at happy hour (early) I'm not going. Anyway, I was speaking to one of the youngins at our party and for some reason we were talking about my high school prom. I mentioned that my high school prom was 25 years ago and he said "really ? I was born 25 years ago". Ouch.
Posted by Noble Glomads at 12:56 AM 1 comment:

We are getting down to the wire now. Our UAB and additional HHE have been packed and shipped. Drove to Roanoke to meet in laws halfway for one final goodbye. Sold the beloved Audi to a family friend and Mom is coming tomorrow for her farewells. I've copied every report card and award that the boys have received since kindergarten for their new school and updated the immunizatiojn records.
What did I forget ? Snacks for plane, one last load of laundry, ride to airport, passport, cash. I can't shake the nagging feeling that I am forgetting something.
Posted by Noble Glomads at 12:42 AM 1 comment:

While I tried to be diligent about watching the packers like a hawk, things happened and a few things got by me and loaded without my inspection. I'm usually a micro manager so this was a bit upsetting for me. Having moved 30 times already, I know that things can and usually do get lost, misplaced, mislabeled, broken, etc. So, when I received my inventory list from the movers and they labeled all 25 of my paintings and wall decor as "mirrors" I was nervous. I wanted my favorite water colors but could do without the 7 "ducks Unlimited" prints my husband had hanging in his "man room" while in New Zealand.
I am also a great admirer of small antique tables you can put knick knacks on. I LOVE small wooden tables and have about 7 of them. I also have a HUGE wooden farmhouse table that weighs @ 500 lbs and a dining table that weighs @ 800 lbs so I was a bit shocked when the mover labeled them ALL as "wooden table". So, which one do I mark as Export ? I also know that my guitar crazy son has a 12 string classical somewhere in storage but it is not listed anywhere on my inventory list. But, panic really set in when Craig called from the Hagerstown storage facility to tell me that a few unmarked boxes mysteriously appeared from the movers after the original shipment. I have no idea what's in them. I can only assume that they are the things that the movers packed up and loaded while I was picking kids up from school and left them packers unsupervised. Darn it.
So, I gassed up the little Audi and drove the 1.5 hours to Hagerstown at 6:30am. You have to be there before 10am to get in to see your stuff. I arrived at 8. Sheepishly, I announced myself and my reasons for being there.
I cannot compliment the workers there enough. The went out of their way to help me decipher the movers' notes on my inventory list. I was able to open a few crates to look at the questionable items and sneaked peeks at other things at the same time. While I wasn't able to open boxes, I was able to differentiate between the wooden tables, paintings and unmarked items. In just over an hour, I found my son's guitar and was able to stop shipment of my farmhouse table and duck posters to NZ. They had his guitar labeled as "pillows" and my farmhouse table as a coffee table. Yikes.
Posted by Noble Glomads at 7:18 PM 1 comment:

Advantages to living at Oakwood

After living in my own homes for the last 15 years, I thought I would hate apartment living in DC while awaiting our departure. It is actually incredibly convenient. Granted, I will only be here for a total of 7 weeks by the time we go but still. We are only a few blocks from the metro, there is a huge pool and hot tub on site and someone comes and changes the sheets once a week just like a hotel.
Having the boys share a room hasn't been bad. There are moments of hostility but for the most part, they are getting along. There is a row of bar b que grills on the patio - very convenient, and a convenience store- even more convenient. The activities center organizes events for kids and there is always someone outside to play with the boys. We have a dry cleaner on site that offers very fair rates, an outside hose for washing your car and the best part-you don't have to calculate your per diem or turn in receipts, they do it all for you directly with the USG. That's one less thing I have to worry about. Perhaps if we were going to be in DC for say 10 months of language training, I may feel differently. The kitchen is small and there isn't anywhere you can go to be alone in the apartment. I like the comraderie that I feel here with the other residents. It has helped my oldest son (13) converse with other kids his age and feel a bit more comfortable about the lifestyle.
There is a grocery store within a couple of miles (Shoppers) and every other shop you could think of. Ther is a great Chinese Restaurant a few blocks away that delivers for a reasonable price.
Posted by Noble Glomads at 7:47 PM 1 comment:

I've been working on being more diplomatic. Not that I need to, I'm a pretty easygoing person and I have a knack for understanding crazy points of view but I do get annoyed with bad behavior. So, I've developed this mental game where I substitute what people should have done/said with what actually was done/said. I'm doing this partly because I have been overusing my favorite word "jackass" lately when annoyed and partly because it is a great opportunity to teach manners to my children.
The most popular opportunity to choose a good behavior over bad is in traffic. It takes about one second to let someone onto the highway. Is it really, really going to kill you to lose one second out of your day?
Another good example was this weekend when we took our kids to a restaurant (ok, it was a bar that also served food) to watch the world cup final and someone pulled their chair right in front of my less than 5 foot tall child and blocked his view. I was annoyed but before I could say anything my friend ripped the guy a new one. While she got what she wanted, she made everyone a little uncomfortable with her confrontation. A better option would have been to politely speak to the guy and say something like " You probably didn't realize there was a little guy behind you when you moved your chair, would you mind terribly just shifting to the left a bit so he can see? Thanks." Why is everyone so angry all the time?
Posted by Noble Glomads at 5:30 AM No comments:

I'm not usually an envious person but lately I've been feeling a bit lacking. When Adrian and I frst started out on this adventure I was amazed and awed by the people. They were all so intelligent and motivated. Some spoke several languages while others ran companies, graduated from Harvard, served in the military, you get the picture. For the first time ever I thought that perhaps there was someone smarter than my husband :)
Now that we've been in it for a a bit, I have gotten to know some of the spouses as well. I can usually slide right into a community, make awesome friends and contribute to meaningful conversations. Now I find myself doing more listening. Yes, I am scared. I'm afraid that if I open my mouth they will know that I only have a Bachelor's degree in (gasp) communications. So, I sit quietly and listen to the stories of these insanely young spouses who have been doctors, lawyers, opera singers and, oh yeah, speak several languages.
They don't seem particularly impressed by my 10 year old's soccer career or the fact that my 13 year old got straight A's AGAIN! Yawn....their kids have been doing that their entire lives. So, I am going to step up my game and whip us all into State Department worthy shape.
Time to brush off the Rosetta Stone, I'm learning Spanish but perhaps I should perfect English first.
Posted by Noble Glomads at 7:17 PM 6 comments:

Labels: underwhelmed by myself

A Career in the Theater

As for a career in the theater our shining example would be Joy Zinoman.  While
a trailing spouse in Malaysia in the '70s and raising 2 young children she
became involved in directing at the university and brought the Malay theater
into the 20th Century.  She came home to complete a combined undergrad and
graduate degree in theater and to found the Studio Theater, one of Washington's
best.  Joy retires this year and will be honored by DACOR with a dinner this
Friday.
On a less professional level my husband and I have either founded or been active
in little theater groups in Jakarta, Kuala Lumpur, Ankara, Medan, Ulanbaatar and
Naples, Italy.  We found it a fun and enjoyable way to bring the English
speaking community together.
Ann La Porta, whose husband acted for Joy in Kuala Lumpur.

Posted by Noble Glomads at 7:04 PM No comments:

After consulting with Morgan about which guitar to buy, Yoon chose a very stylish "chick magnet" acoustic from the Guitar Shop in Falls Church. 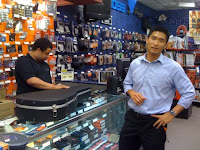 Posted by Noble Glomads at 12:48 AM No comments:

We move out when?

Ok, so I knew we would have to repack before heading out to New Zealand but I really thought it would be easy. I mean, they have people for this right? Some guys come, pack up your stuff, put it on a ship and send it to our new house. That apparently is the easy part. Getting someone in the transportation department to answer the phone is another story. I started on Tuesday. It is now Friday afternoon. Uh, I have 3 weeks to get my stuff organized, moved, sorted and shipped but first I need an appointment. I guess my advice is to all new comers; make your appointment for your pack out as soon as you arrive J. And, don't forget to give your temporary living manager a 30 day notice when you move out otherwise you could get kicked out early or have to pay for your additional days.

Dining Out in Falls Church 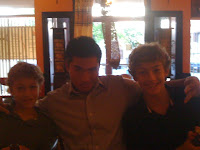 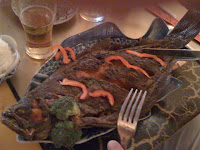 If you want to go to dinner at a good restaurant in Falls Church on a Thursday night you have to make servations. We did not make reservations so tried the Thai Restaurant near the Restaurant we wanted to eat at.

The inside was not spectacular but the service was great and the food was very good. After waiting longer than he should have for his dinner (we were all served 20 minutes before him for some reason) Adrian's dinner was worth the wait.

Posted by Noble Glomads at 12:27 AM No comments: