Well, while Ewan's birthday party was a bit unsettling, mine was awesome.  Since Adrian had a week off of work and the boys were off from school for summer break, we decided to head to the South Island and spend my birthday there.  We did ZERO planning aside from booking tickets on the ferry.  With our diplomatic status, we were entitled to half price ferry tickets (usually $800 for 4 people and a car) until the 15th of December. So, we kinda had to plan that, the rest of the trip we were gonna "wing it".  We had a general idea of where we wanted to go and what we wanted to see but no set plans or hotel rooms.
The ferry ride over was very nice though both boys got a tiny bit seasick. Adrian was in heaven. I think he took a thousand photos.
We spent our first day and night in Nelson and found a very clean and comfy hotel right near the beach. I have to say, this was one of the best beaches so far that I've seen in NZ. It reminded me of Fla. The sand was light and clean, the water was lovely and there was room to run around, or fly a kite! 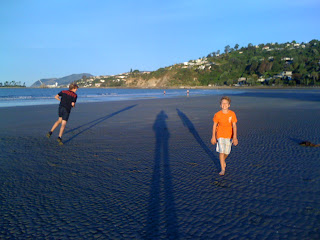 We moved on closer to one of our chosen destinations: Abel Tasman Park. It is reputed to be gorgeous and did not disappoint.  Adrian wanted to go Kayaking with the boys and since I had no intention of going out for a 4 hour kayak, I volunteered to pack up the hotel and hang at the beach we had found the day before.  While Adrian was hunting for our 2nd hotel of the journey, the boys and I found this sweet little lagoon right off the beach at Abel Tasman. 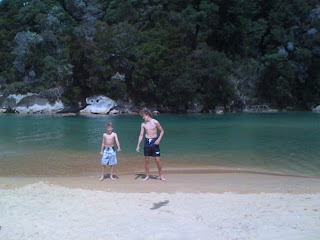 No sharks :)
The restaurant selection here was a bit dismal but we had places to go and things to see in Kaikoura so we headed east to our next destination.
Kaikoura is a really fun place to spend your birthday. I have to admit, I was spoiled. Kaikoura is home of the Crayfish, or as we call it, LOBSTER. They aren't cheap ( @ $80 each) but they are good.  You can stop at a little trailer on the side of the road and have a lobster right there, freshly plucked from the ocean. 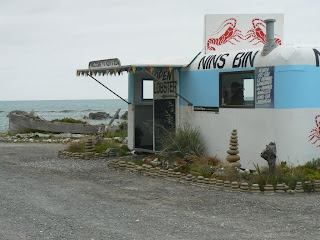 With some time to kill before upgrading to our next hotel (our first one had no Internet "gasp") we headed to the seal hang out to check out the seals. The lady at the Lobster Shack told us about a short hike into the forest where you can see baby seals hanging out in a stream. They apparently swim up there to hang out while their moms hunt. I had read about this place earlier and was dying to go though our odds of seeing the seals were slim since they mainly go in the winter.  Our chances were also diminished by some jerks who recently had gone up there and slaughtered @ 30 of the pups. The seals will probably never come back now ruining a great local opportunity and tourist attraction. The waterfall was beautiful though and we enjoyed the hike. 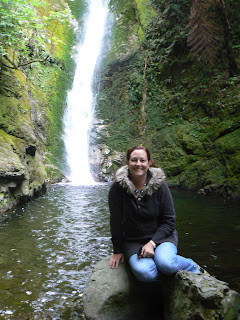 Our new Hotel (Waves) was amazing. It was actually made up of independently owned apartments that the owners rent out nightly.  It was expensive and worth every penny.  It was a full 2 bedroom apartment with everything, super clean and very modern.  Right next door was the best restaurant in town where we ate this: 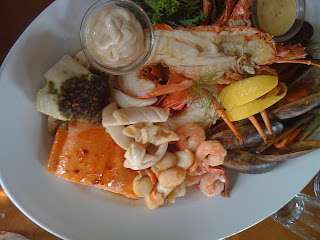 Early the next morning Adrian went whale watching. The boys and I had had enough sea sickness and knew we were getting back on the ferry later that day so we decided to hang out in Kaikoura while daddy went out on the boat. As a nod to Ewan, our resident vegetarian, we went to an animal farm to make up for his lost whale watching trip. It was a bit lack luster but the animals were cute and we were allowed to feed them. I was even able to get over my fear of chickens when a overly friendly chicken sided up to me and begged for food. 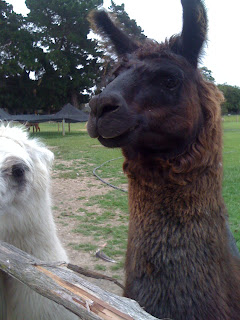 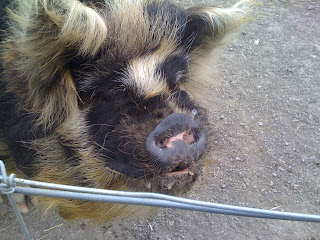 I loved it. My birthday was perfect and I got to celebrate it again when we got home.  As a special gift, a pod of dolphin followed our ferry out of the harbor. Thanks boys.
Posted by Noble Glomads at 12:43 AM